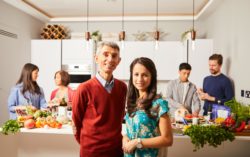 Christopher Dawson is founder and CEO at Japanese and Organic Fine Foods brand Clearspring. They offer over 300 products, spanning 28 categories including Organic Japanese specialities and European and international fine foods, all of which are plant-based.

Clearspring was founded in 1993 to pioneer and distribute authentic, plant-based Japanese specialities and organic fine foods worldwide. I’m proud to say that we are still a family business and are as committed as ever.

The seeds of Clearspring really started growing in New Zealand, where I was born and raised and where, at the age of 19 (in 1972), my interest in organic agriculture really began. I came to the stark realisation that there was a gross misuse of nature, excessive use of land for animal feed and the overuse of chemicals in conventional farming. A stark example of this is if, for example, you take 100kg of soya and fed it to livestock, you can produce approximately 10 servings of meat. However, if you take that same 100kg of soya beans and transform them into miso, you can make 10,000 servings of miso soup!

I wanted to learn more, so spent several years studying Organic and Biodynamic farming in New Zealand and the UK. It was in 1979, when I travelled to Japan to study their food culture that I discovered something fascinating. During the Edo period or Tokugawa period between 1603 and 1868 of self-imposed isolation, the Japanese had learnt how to sustainably cultivate foods both on the land and on the coastal seas. With this, the hospitality of the people, the food and culture, I decided to make Japan my home and spent the next 18 years there, helping to convert conventional farmers and artisan food producers to organic.

I decided to move to the UK and take what I had learnt from Japan and the products I had helped convert to Organic status and take them to a much wider international audience. Today, nearly 30 years since I started Clearspring, we have over 300 certified Organic and Demeter products, contract-produced by 88 food producers in 15 countries.

Every week at our Monday morning meeting, I remind the Clearspring team that our prime focus is to ‘constantly work and play to convert one more acre of land back to Organic each day.’ Whether this is by supporting our farmers and producers or championing and promoting Organic, Biodynamic, plant-based, and sustainable foods to shoppers.

This principle taps into our bigger mission, which is summed up by the Clearspring 3 Ps:

Each product that we offer in our range must meet a very strict set of criteria. It has to be 100% plant-based, made without using any artificial additives, colourings, preservatives, or use any added refined sugars. We carefully vet the producers we work with to ensure they are meeting the high Organic and ethical standards Clearspring demands. I have worked with many of our existing suppliers since 1980 and have very strong personal relationships with them. It will be no surprise that many of them, like Clearspring, are passionate about good quality, healthy food and are also independent family businesses.

Next year, we mark our 30th anniversary, just as Better Food is doing this year! We want to congratulate and commend Better Food for their fantastic achievements and continued success and hope to be a part of their journey for the next 30 years!