We’ve gone a bit mad for mushrooms these past few months, ever since discovering the incredible organic fungi cultivated just a stone’s throw from Bristol by Tom Baxter and growing assistant, Henry. Here, The Community Farm – who supply the Fungarium’s mushrooms to our stores – talk us through Tom’s set-up and explore the delicate balance required to cultivate his marvellous creations. 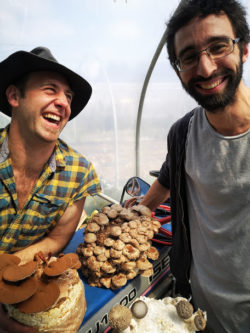 Tom Baxter and Henry Jephson at the farm

Tom and his crew at The Bristol Fungarium are located near Yatton, just over 10 miles southwest of Bristol. A longtime forager of forest mushrooms, Tom decided to make the move into commercial mushroom production a couple of years ago. The results have been nothing less than stunning, both in terms of the varieties of mushroom they cultivate and the setup that they’ve created to make this possible.

Tom’s network of self-designed shipping containers and polytunnels have, where necessary, been carefully teched-out to mimic the natural growing conditions of their fungal cargo; various sensors and controls allow for humidity, temperature, light levels and the CO2/O2 ratio to be tweaked manually and automatically in order to best suit each species’ lifecycle. For instance, mushrooms typically found in equatorial conditions are accustomed to days and nights of uniform length, so they enjoy a strict “12 hours on, 12 hours off” lighting regimen. Programmed shifts in temperature and humidity enhance this effect and single out the folks at The Bristol Fungarium for being somewhat ahead of their time, given that they’re the first operation in the UK to grow mushrooms with such feedback loops in place. Their biggest environmental challenge? Keeping the temperature down in summer! Mushrooms can be very picky, and even the British summer can be a bit too much for container-bound species accustomed to fruiting under the cooling influence of large trees in deep, shady woods.

The Bristol Fungarium is currently growing a variety of oysters (including blues, kings and clones of a grey oyster mushroom found by Tom in nearby Brockley Woods, Somerset), shimeji, maitake (also known as hen-of-the-woods), shiitake, lion’s mane, and wine caps. Most are grown on Dutch-sourced organic substrate (the “soil” that the fungus colonises via a dense, webbed network of white mycelium threads, from which mushroom “fruits” appear) but Tom and team are in the slow and labour-intensive process of creating their own substrate, primarily using hardwood woodchips sourced from tree surgeon friends of theirs and sawdust from a lumber yard located just a few doors down.

However, this is a process fraught with possible wrong turns. And, the more this process is scaled up, the higher the stakes: a bad batch of substrate or a slip in sterility typically means a catastrophic loss due to contamination, so there is very little room for error! Right now Tom and team are creating about 100 “bags” per week. This involves mixing the substrate (about half-a-ton) by hand, loading the bags, pasteurising the bags, inoculating the bags with mushroom spores, and then incubating the bags until they’re fully colonised and ready to start fruiting. For some species, this could mean months of waiting – always with an ever-present chance of disaster! 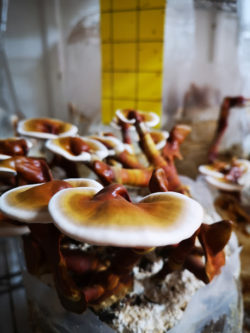 But the benefits of mushrooms far outweigh the difficulty of their production and, in Tom’s opinion, make them a must-have on everyone’s shopping list. Besides containing vitamin D and being high in protein, current research is revealing an ever-growing number of medicinal properties. For instance, most mushrooms act as immune system regulators (lion’s mane is a great example of this) and certain varieties can be used to treat specific conditions.

Although not involved with mushroom medicinal trails, Tom and team are always interested in new growing techniques, and are working closely with a researcher from Kew’s fungarium to run field trials growing parasol mushrooms and morels on-site. Their lab is an alchemist’s den of cultures and autoclaves, and I’m sure we’re going to see some very interesting varieties making appearances in our punnets as time passes.

Many folk tales make mention of mushrooms and, regardless of the rational explanations we are privy to nowadays, it does still seem quite magical when we come upon a fairy ring of mushrooms in a meadow or find ourselves scratching our heads when they pop-up overnight on our lawns. Indeed, what Tom and team are creating is nothing short of magical.