What is organic certification and why does it matter? 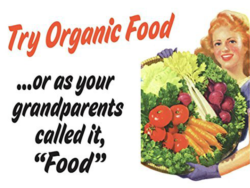 1 Organic Farming and its big cousin Conventional
2 What is organic certification?
3 Why does it matter?
4 How can you trust it?
5 Is that why it might cost a bit extra?
6 Further explanation about certification
7 Organic and other certifications
8 References and links

I had a fridge magnet once that said ‘Try organic food … or as your grandparents called it, “food”’.

Since the 1950s, the amount we spend on food has fallen sharply (1) (while our housing and transport costs have more or less doubled (2)).

There are several reasons for this. It’s partly because the mechanisation of farming has made it possible to produce cheap food. It’s also because fertilisers and herbicides have increased crop yields, while giving livestock hormone treatment and antibiotics has boosted growth and helped prevent disease. These practices really got going after World War Two, and we’ve loved what they’ve given us, to the point that inexpensive food has been by far the main driver in how our diets have changed. It has become the norm. 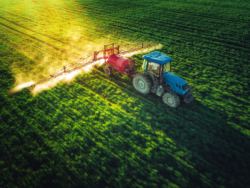 In the 70s it was beginning to feel necessary to make a distinction between two types of farming systems – mechanised ‘conventional’, and small-scale, chemical-free ‘organic’. Those in the latter camp (such as our founder Phil Haughton) wanted to level the playing field and let consumers know they are not the same. Apart from anything else, in the UK, subsidies have helped these conventional farms enormously, while smaller organic farms have had the double whammy of much smaller subsidies and the increased costs of farming and certifying to organic standards.

For many years, organic farming seemed to be on the back foot, side-lined for middle class food snobs and (my favourite Better Food review ever) ‘mung-bean fondling twerps’, because it was perceived as expensive and unrealistically romantic.

2 What is organic certification?

Leading the vanguard of people– scientists, farmers, health professionals – concerned about what was happening in the fields across Great Britain, was the Soil Association, originally formed in 1946. They noticed that while yields from conventional farming were high, soil was in an increasingly poor state, food quality was decreasing, the well-being of livestock was being compromised and wildlife seemed to be in decline.

Their work became part of a worldwide push towards a better stewardship of the land and some standardised practices to help make this happen (3). In 1973 these standards became accreditation schemes and since then, all organic food and drink sold in the EU has to meet the EU Organic Regulation (4).

In short, the standards ensure (5):

3 Why does it matter?

It matters because it guarantees: 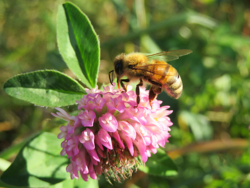 A better chance for bees and wildlife to thrive
On average, plant, insect and bird life is 50% more abundant on organic farms (6). This biodiversity is important, not just because nature deserves it, but because ‘wildlife’ includes pollinating and pest-controlling insects, crucial to crops.

Healthier soils
Soil on organic farms is a great carbon sequester (7) and is bursting with micro-organisms, helping to combat climate change and prevent flooding and drought. Soils on many conventional farms, routinely stripped of organic matter by years of chemical input, have now been recognised as being at a major disadvantage. It’s a vital piece of the jigsaw when you consider that 95 % of our food comes directly or indirectly from our soils (8), and it can take up to 500 years to form 1cm of top soil (9).

Fewer pesticides and no artificial fertilisers or herbicides are used
There are almost 300 pesticides available to non-organic farmers, while all but 20 are banned in organic farming (10). Not surprisingly there are also fewer pesticide residues found on organic produce. More traditional methods, such as companion planting and encouraging natural pest control are used first and foremost.

GM is banned
Throughout the world, organic certification is the only way you can guarantee a product is GM-free. It’s controversial, as this pro-GM article about its use in Ghana indicates. On the flip side, there is a mountain of evidence that GM creates as many problems as it solves, such as the rise and rise of herbicide-resistant superweeds, and the proclivity of an industry dominated by wealthy corporations set to ruin subsistence farmers who become reliant on their seeds (11i, 11ii & 11iii). Basically, some parts of the world love ‘em, Europeans, on the whole, do not.

More of the good stuff …
Organic crops are up to 60% higher in a number of key antioxidants than conventionally-grown equivalents. After years of dispute, this is now pretty much accepted by the scientific community (12).

And less of the bad …
Organic fruit and veg contain lower concentrations of pesticides and the toxic heavy metal cadmium (12).

4 How can you trust that what you’re buying has really come from an organic farm and has been produced using all these criteria?

There are two types of organic licence. Farmers and growers have producer licences, while people who turn these raw materials into other products (flour into bread, pig into sausages etc) have a processor licence.

We have a processor licence at Better Food because we buy in sacks of organic food in bulk – all our fresh produce and packaging free goods for example – and we put them into bags or self-serve bins and resell them. 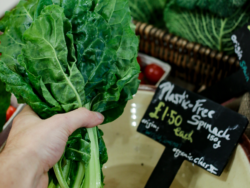 We, and all Soil Association licensees, are inspected annually to check our audit trails (to make sure our goods-in match our goods-out), our storage areas (to check non-organic and organic goods can’t get cross-contaminated), and our labelling and merchandising etc. It’s really strict. For example, we sell several products under our own Better Food brand. They’re organically grown from certified growers (our Italian passata and olive oil, our Sicilian orange and Priors Grove apple juice, for example) but because the facilities they are sent to for processing aren’t certified (because we’re doing it on such a small scale), we can’t sell them as organic, or even mention the word on any labels or signage associated with the product. Since the uncertified processor sites break the chain of custody, we can’t produce an unbroken audit trail so we can’t 100% guarantee the products are made from organic produce (though they are, by the way).

So we’re scrutinised, audited, held to account, and ultimately banned from trading if we break the rules. This is why you can trust the logo. The logo is the seal of approval that all these checks and balances have been followed.

5 Is that why it might cost a bit extra?

You’ll also find that organic supply chains tend to be less exploitative than some conventional routes. Going to all this extra effort costs more, and it’s only right that that’s reflected in the price. This isn’t me trying to justify why we tend to be more expensive than supermarkets or purveyors of non-organic goods, it’s just acknowledging as transparently as I can why this is the case. You can read about our pricing here if you want to know more.

On the other side, as oil and petrochemicals get more expensive, as soil erosion and other environmental factors become a cost to businesses, organic prices will become more in line with conventionally produced food. You could argue (I often do) that it isn’t that organic food is expensive, it’s that industrialised food is too cheap. It’s unrealistic to think we can rampage on in the old ways, polluting and exploiting our limited resources.

Factor in some local sourcing and seasonality, and you’ll find that organic produce is often cheaper if you’re eating it at the right time of year.

Most of this article centres on the Soil Association’s work. Soil Association Certification audit and accredit to the organic standards, as do several other bodies. In the UK these include Organic Farmers & Growers (OF&G) and The Organic Food Federation.

All organic goods imported to and sold in the EU display the green leaf mark. Other countries also have their own marks, such as USDA Organic in the USA, Agriculture Biologique in France, JAS Standard in Japan and so on.

7 Organic and other certifications

Symbols like the ones above, with verifiable schemes to back them up, are helpful pointers in a crowded retail environment. Others include Fair Trade, Fair Wild, Fair for Life, Cosmos (for organic beauty products), GOTS (for organic textiles), Vegan Society, Marine Stewardship Council and B Corp (guarantees a business is ‘balancing purpose and profit’). 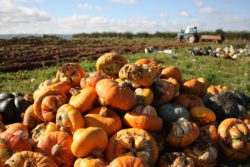 On the whole, don’t trust the word ‘organic’, unless it’s accompanied by some kind of accreditation or a displayed certificate. And put on your cynical hat when you see words such as ‘from nature’, ‘natural’, ‘outdoor bred’ and ‘farm-reared’. They’re marketing flim flam. ‘Free-range’ is ambiguous as there isn’t a standardised definition of what it means.

So finally, yes, organic certification is a symbol you can trust, yes, it is important for health and the environment and yes, it’s worth it to know what you’re getting and to continue to support its growth as one of the solutions to feeding a world of diminishing resources.

3 IFOAM stands for the International Federation of Organic Agriculture Movement
www.ifoam.bio/en/about-us/history and is the international body that holds organic standards together worldwide.

4 The leaf symbol is the EU organic standard symbol, and its principles are legally binding in EU law
ec.europa.eu/agriculture/organic/organic-farming/what-is-organic-farming_en

5 the most succinct overview of worldwide standards I could find en.wikipedia.org/wiki/Organic_certification

11i A really fascinating read about the subtleties of genetic modification vs cross-breeding www.forbes.com/sites/erikkobayashisolomon/2019/02/15/heres-the-real-reason-why-gmos-are-bad-and-why-they-may-save-humanity/

11ii Go to the bit with the headline GMOs in Practice
www.natureandmore.com/en/all-about-organic/why-is-organic-agriculture-gmo-free

11iii This is why GMs are banned from organic
https://www.ifoam.bio/en/gmos/keeping-gmos-out-organic-project